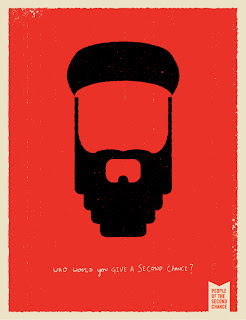 So today I was reading some of the comments about this man we know as Osama Bin-Laden. I watched recently the world rejoice at the death of this man. I myself was conflicted about that, I wonder what our reaction would have been if word had come out that Bin-Laden had laid down his weapons, and repented of his past acts, pledging a new life and a new tactic: peaceful resistance... I wonder how the the worl...how might I have reacted to that? How might you have reacted to a repenting terrorist?

The I think back to Acts 9: There was this dude back in the 1st Century that the bible says was breathing out murderous threats against the Lord's disciples, and had obtained letters to seek out, arrest, and bring to account any who belonged to the Way. This guy Saul was what we would consider a terrorist. Yet while he was on his appointed rounds, Jesus has another idea of how to handle Saul...convert him! The reaction of the people of the Way was skeptical at best. Most would not believe that this man had changed, that this was all a clever scheme to infiltrate the Way and take out the leaders. One man named Ananias was told by God to go and see Saul and touch Saul, and baptize Saul. Ananias reasoned with God that surely this was a foolish mission, a trap. This Saul had warrants for the arrest of any Christian, even any one suspected of following this Christ. The Lord simply told Ananias to go.

How do you react to this story? Is your initial response to say, yes but Jesus called out this man Saul, by name. Do you think that God rejoiced at the killing of this man Bin-Laden? Or does God grant the opportunity of grace to all?

Unknown said…
Yes. Second chances are radical, but this is what Christ Does. Victims need to forgive their attackers. I do not say this without tears. Look at the Parable of the Unforgiving student (I mean servant, Freudian slip) Matt 18, We must forgive because the King has pardoned us. Your trespasses meant something and they cost much, blood. Jesus' blood covers every sin, including the people who hurt you. And before you start saying, "this guy has never known hurt, he knows nothing of the cost of pain." Jesus has granted me strength to forgive my rapist. I desire him to have a second chance in Jesus. I pray that Christ reigns in him and that he knows his debt to me is forgiven. No one deserves hell Especially your enemies. What we are truly afraid of from God is reconciliation. Now if God chooses to put Tim back in my life, he will not watch my household. But he will be loved. Everyone can have the forgiveness of Christ. Christ forgave all on the Cross, and i believe a teacher is not above his student. Healing is a choice my friend, Being healed releases the demons that keep you captive. The torment leaves when it is given to God. Can demon torment the creator. He is greater than everything including hurt. And if you still dont think forgiveness and second chances (which go hand in hand by the way) are required by Jesus read Matt 6:15. Osama doesnt deserve a second chance, but in that same breath neither do we.
8:41 AM

David Creek said…
Ten years ago I would have been incensed at the idea of giving a man like Bin Laden a second chance, let alone really praying believing that I was really praying for his best rather than for his worst.

But today, my answer has become yours. Saul of Tarsus is a name that must come up.

Saul of Tarsus. What kind of man was that? A proud man. A terrorist. A legalistic man. A legalist. etc.

But when he became Paul, what words could we have of him then? Loving. Tender-hearted. Bold but truly for God this time. Though he had moments of fright just like us, through the strength and comfort of the Lord, he was fearless.

Simon Bar-Jonah, what kind of man was that? A brash man. An impetuous man. A man who was so flawed just like anyone else but the Peter we see writing 1 and 2 Peter is not the man who cut off Malchus' ear and who distanced himself from the Gentile saints to please the Jews who were sent from James. In all the Bible, aside from Jesus, I love the heart of Peter most, flaws and all.

...David Creek, what kind of man was that? A timid man. A coward. A selfish person. A negative worrying complainer. Someone who had trouble controlling his anger.

But after Christ, in spite of my weaknesses and flaws, I've been growing up into His man.

But just the thought - that if Adolf Hitler had somehow and someway obeyed the Gospel, though he would have been executed whether or not he took his life in the bunker, if he obeyed the Gospel from the heart, he is just as precious in the sight of God as Paul is...as Ted Bundy is, if he did indeed obey from the heart as well.

Then I think about sin - how all sin is unrighteousness.

How me maintaining an anger problem 4 years ago was just as sinful as someone living a homosexual lifestyle.

They dragged a half-naked woman before Jesus who was caught participating in adultery.

She was impure. She was a whore. She deserved to die.

Jesus said He'd love this woman and give her another chance.

They dragged a notorious murderer-thief-insurrectionists before the mob and gave them a choice.

The power of God said "I'll give Barabbas another chance." And the guilty, sinful, violent man was let go while the innocent, pure, spotless Lamb of God died on his cross.

July 27, 2008
Okay, I wanted to ask another question. How do you see God? How do you picture, view, imagine, etc... Do you see God as this big police officer in the sky, waiting to pull you over for reckless living? Maybe He has set up a trap to catch you, a "sting" to arrest you for your sinfulness and shame you into being a better Christian. Do you see God as a wish-fulfilling Genie? Running to Him in prayer, during times of crisis. Speaking of crisis, maybe you view the Almighty as some kind of hostage negotiator... SO you give Him your list of demands, the things that you are bargaining for before you will set your heart free to Him. Maybe He is that old guy who lives on your block, you know the one...He knows about everybody else on the block. He is always going from house to house, always with some crazy idea about how you could better mow your grass, raise your kids, drive your car, etc... Perhaps you see God as this ancient powerful man imaged creature, sitting on a throne, wa
Read more

March 26, 2008
This week, we have a guest writer. Dalton (my 16 year old) will be giving his perspective on "keeping it real." Feel free to comment, I will pass it along to him. -------------Johnny Maybe the Coca-Cola Company had the right idea, maybe, with this world that advertises with anything but reality, they were able to see some form of the light. "Keepin' It Real" was and still is a slogan that obviously affected many people, so who is to say we can't use it in our own walk with Christ? First, let me pose a couple of questions: What is "Real?" How do we keep it?, and, more to the point, where do we get it? Let me say this, we can only find real inside of ourselves, it is not something to be bought, it is not something that there is an eternal search for, except inside yourself. I had a friend, who, in a recent conversation about a job interview said "I wish I could just fake it." There is a problem there, once you fake it, once you have p
Read more

September 05, 2008
"When He (Jesus) had finished speaking, He said to Simon, "Put out into deep water..." Luke 5:4 (HCS) Growing up in a family that owned a public swimming pool, I spent a couple of days at the pool, and in the water from as far back as I can remember. My family tells me that when I was just a toddler, my brother was in the deep end of the pool and teasing me to "come on in," and reportedly I did. That one incident did not fulfill my desire for the deep end of the pool though. At the age of about 5 or so, my Mom witnessed me swimming from pole to pole along the rope which divided the deep and shallow end. I remember my own children wanting to get to the deep end of the pool too. The singing group Casting Crowns has a song entitled "Somewhere in the Middle" an excerpt that leaps out at me is... "Just how close can I get, Lord, to my surrender without losing all control" How close can I get to submitting to God and still keep my __________
Read more